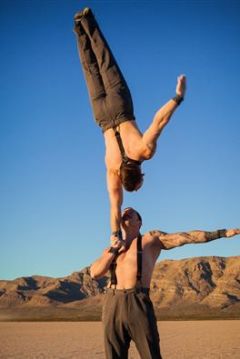 Duo Ronin, currently based out of Las Vegas Nevada, have been working together since 2012 and during that time have been wowing audiences with their feats of strength and balance.

The hand to hand balancing act that they perform resembles that of the old time strongmen.

Chris Jones, originally from Durham, England started his career competing in sports acrobatics for Great Britain. He later joined Cirque Du Soleil’s WINTUK show in which he performed as a central character. When that show closed in 2011, Chris went to Las Vegas seeking to further his career in the performing arts. A year into a solo hand balancing act, Chris met Blake Carter and together they developed their hand to hand act, taking him back to the acrobatic roots and that he’s most passionate about. *****************************************

Blake Carter is originally from Midwest City, Oklahoma. He found the circus arts after performing several years as a stuntman, dancer, and actor. Blake began training with different aerial instruments: rope, strap, and silks. This helped him find his way to performing in Franco Dragone’s Le Rêve in Las Vegas. While there, Blake continued to extend his skills as an acrobat and circus artist before moving on to pursue a soloist career with several shows on the Las Vegas strip till finding Chris Jones and finding his passion for hand to hand balancing. This will be their first year at Seattle’s Moisture Festival and we are so pleased to have them.