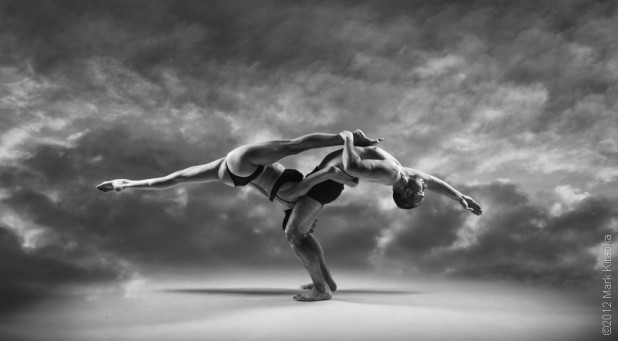 Patricio was born in Argentina and has 18 years of experience as a Tango dancer. In 2008 Patricio joined the creation of ZAIA, the first show staged by Cirque du Soleil in Asia. Inspired by the beauty of the movements performed by his fellow artists he became curious to try some simple lifts. It was then when he discovered his new passion, hand to hand acrobatics. He met his hand to hand partner Laetitia Olivia in 2010 and they formed Duo Flor de Piel.

Laetitia, a native of France travelled the world for 10 years with Cirque Du Soleil performing as an aerialist for 6 years with their touring production of Quidam. Prior to her work with Cirque du Soleil she was a competitive gymnast. Laetitia took a short one year break from her rigorous schedule for the birth of her son, but returned to assist in the creation of Cirque’s permanent show “Zed” in Tokyo Japan. She married her husband who was a Seattle based rigger for Cirque and they relocated to Seattle in 2010 where they currently reside.

Patricio and Laetitia’s group Duo Flor de Piel perform throughout the Northwest. “Our work together will continue in 2013 and will include the collaboration of several other performing and fine artists. It’s an honor to be associated with such accomplished individuals.