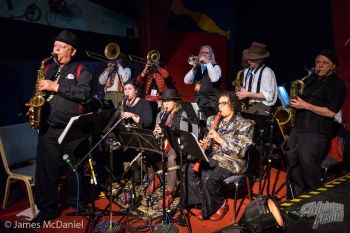 Doc Sprinsock and the SANCApators are the fabulously eclectic house band for SANCA, the Seattle circus school. When Fabio Sprinsock was born on a cold, gray Seattle morning, he was so surprised he didn’t speak for a year-and-a-half. His parents were sharecroppers eking out a living growing sorghum in the strips of land between the runways at Boeing Field, and his childhood pet was a snapshot of a dog. These humble beginnings naturally led him to leave town at his earliest opportunity. Fabio, or “Doc” as he came to be called after he saved a German tourist from choking in an IHOP, was soon introduced to the marching band at the Oregon Country Fair. He went on to lead that band, and the band for the New Old Time Chautauqua, and when SANCA, the Seattle circus school, needed a band, by golly he was going to lead that one too. Doc called on an elite crew of musicians, and the SANCApators were born. Together they are the best band in their price range, and they play for truth, justice, and whatever goodies are left over after the performance.