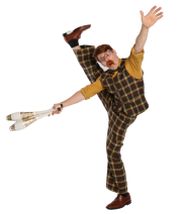 With a style all his own, Curtis fuses world class juggling skills and fresh, innovative comedy. A featured performer with the nationally touring Do Jump! Extremely Physical Theatre, Curtis now performs at corporate & community events, colleges, comedy clubs, fairs and festivals as well as television appearances and goofing around in the backyard. An award winning juggler (at the International Jugglers’ Association competition), a snappy dresser (well, that part isn’t as well documented yet), and an all around nice guy … we have to agree with Mike D. of The Beasty Boys who said of Curtis Carlyle “That kid has the funky moves.” 2017