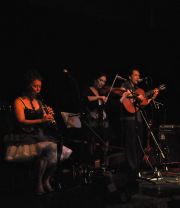 Pronounced: Core-RAY-o Eye-AIR-e-o Spanish, meaning: Air-Mail… ******************************* Cuz that is how sound travels you know, delivered through the air on waves of sound that penetrate you; not just through the ears, but through the entire body. Oh yeah! So get ready to be soulfully rocked, exquisitely pulsed and mercilessly, deliciously taken on musical joy rides by this all-star award-winning trio playing sizzling music from Latin America that you’ve probably never heard before, & on instruments & in ways that may surprise you! & if you really give them some love they may enchant you with a sultry ballad too! Correo Aereo; Abel Rocha & Madeleine Sosin, have toured the United States and Europe for over 20 years, delighting and transporting audiences at festivals, concert halls, clubs, universities, schools & house concerts. Their music has been played on NPR Radio’s Latino USA & Radio Pacifica’s, Democracy Now and featured on television, film and soundtracks such as Universal Pictures ‘The Life Of David Gale’ staring Kevin Spacey and the independent documentary ‘Before The Music Dies’, with a host of musical luminaries including Erica Badu, Eric Clapton, Doyle Bramhall ll, Bonnie Raitt, and many more. Winners of the Austin Music Awards Best Traditional Latin Group, The Austin Chronicle states; “Together, their vocal harmonies are locked in carnal embrace. Their music has sabor. Madeleine is constant and fluid motion. Her hands, legs, her hips sway. She doesn’t shake the maracas, she jerks, snaps, rolls, twirls and spins them. Abel is the counterweight; his relaxed, confident style of playing holds the stage together and makes the music solid. A better pair of performers I’ve not seen in Austin…or anywhere else. There’s a huge difference between good performers and just good musicians. Abel and Madeleine are by far the best of both. Take my advice: skip class, skip work if you have to. See Correo Aereo.” They are joined by long time collaborator, Amy Denio. Amy Denio is a composer, improviser, multi-instrumentalist and producer based in Seattle. She has produced over 40 recordings solo and in collaboration with artists word wide. She was inducted into the Seattle Jazz Hall Of Fame in March 2015. Denio has played in Kultur Shock since 1999, and is a founding member of the all-women Tiptons Sax Quartet and her accordion quartet Hell’s Bellows. She collaborates with numerous groups such as Correo Aereo & Ama Trio (Mexico/US), OU (Italy), Die Resonanz (Austria), and other artists from many lands. She has been performing and teaching musical workshops in clubs, squats, prisons, churches, sanctuaries, subways, and abandoned buildings perched on 6 continents for the last 30 years. Denio has also created many multi-media performances and installations worldwide. Her interactive public Sonic Bench is on permanent display in front of the Vashon Parks Department office.