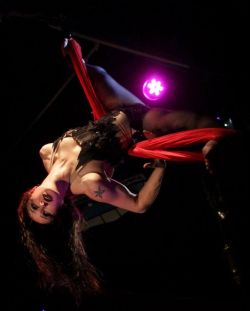 Charly McCreary has been dancing in the air since 2001 and has worked and trained with esteemed coaches and choreographers including members of Cirque du Soliel and Cavalia. She is based in Seattle and has performed all over North America including Chicago, Denver, and Vancouver, B.C. as a member of the Cabiri performance troupe and as a solo artist. Her expressive, dramatic style is especially captivating on aerial sling and aerial hoop and she is thrilled to debut a new solo work at the 2014 Moisture Festival. See more of her this summer as a fierce, air-bound angelic Watcher in the Cabiri’s epic new production Tewaz at the Cornish Playhouse at Seattle Center June 6-14, 2014.