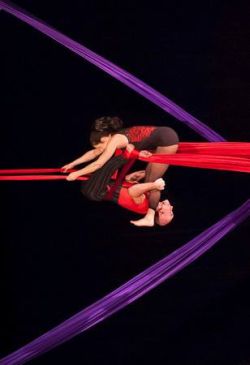 Chapter 2 is the aerial duo of Esther Edelman and Glenn Easley. Esther has over 25 years of choreographing, directing and performing experiences and is a founder of the 4 women triple trap gang Aviatrix, the Vashon aerial troupe The Silkworms, and of the groundbreaking UMO Ensemble. Esther teaches aerial classes on Vashon where she first met Glenn Easley who came on as her student and soon was part of the Silkworms. They became entranced with duo fabric work and will be premiering their act here at the Moisture Festival. Glenn’s background is Acrobalancing, Martial arts, African drumming and Architecture. They send special thanks to Duo XY and Georard Theoret.