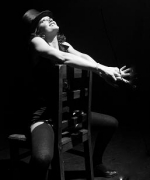 Born into a show biz family on the other side of the Berlin wall, Chantall formed her own sense of style as she trained to be a contortionist. When the wall came down she brought her act into the exploding European Varietè scene. Chantall’s stage sparkle called for something more and she developed several acts that allowed her to show her several talents. Comedy magic, cabaret singer, show MC, producer … she’s come a long way to get wet with the rest of us at this year’s Seattle Moisture Festival. Chantall!