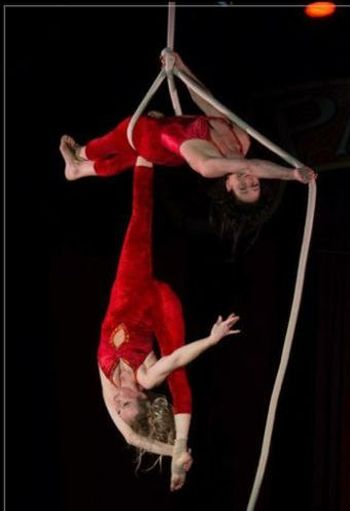 Cathy is one of the original Daring Deviante Sisters, a skilled acrobatic duo with an odd sense of humor who brought a new element to the blossoming New Vaudeville scene in the 1980s. Active in several areas of Seattle’s performing arts community, she contributes by singing, dancing, teaching, acting, and performing aerial and land-based acrobatics. Cathy’s acting and comedy skills have enhanced shows she’s performed in with the Flying Karamazov Brothers, Theatre Schmeatre, the UMO ensemble, Printers Devil Theatre and the Royalle Famille DuCaniveaux. She’s also worked with local film makers Greg Lachow and Rob DeVor. Cathy has taught elite – level gymnastics in the Northwest for over 25 years. This Daring Devianté’s stunning résumé and curriculum vitaé suggest that she’s an artisté in the fields of Varieté, comedé, dancé, and aerialé as well as a backup singer for one of the sexiest singing ensemblés to ever get their enjoys on a stagé. Add to all of that the fact that Cathy is one of the central organizers of this festival and … well, if you’ve noticed a spark of bright energy that seems to illuminate and hold together the disparate variety of Varieté shows that make up the Moisture Festival you now know one of the important lighthearted reasons.