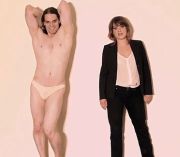 Last summer the boys of Mod Carousel joined forces with Caela Bailey, Sydni Deveraux and Dalisha Phillips to produce a video parody of Robin Thicke’s controversial hit song Blurred Lines. They explained on their YouTube page that: “It’s our opinion that most attempts to show female objectification in the media by swapping the genders serve more to ridicule the male body than to highlight the extent to which women get objectified and do everyone a disservice. We made this video specifically to show a spectrum of sexuality as well as present both women and men in a positive light, one where objectifying men is more than alright and where women can be strong and sexy without negative repercussions.” That video is now closing in on five million hits! and they have unleashed a discussion that has set tongues (and keyboards) wagging across the world and across the internet, including Huffington Post, Slate, YouTube, Jezebel.com and many many other sites. At Moisture, we’re so proud of them and they are rewarding us with live presentations at this year’s festival. We can hardly wait.