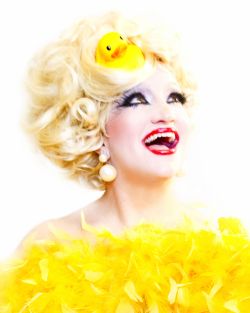 Ms. DeBris, raised on a ranch somewhere in Nevada with a lot of mommies, is known for her endearing personality, her sparkling wit and repartee, and the original rap songs she co-writes with Eric “Travis” Wilson. She is blonde through and through, and as her mommy Tallulah used to say, “Oh Blanche, you’re not very pretty…but at least you’re stupid!”