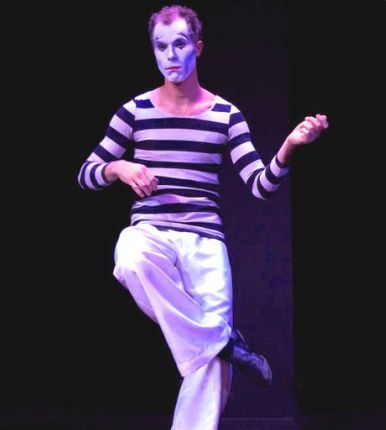 Benedikt Negro is a pantomime and clown who has starred in Cirque du Soleil’s water show, “O”.  He trained at Die Etage School for the Performing Arts in Berlin.

Originally from Xanten, Germany, Benedikt began his career as a performer at the tender age of nine. He performed as a sideshow artist in his first professional show. Interest for this fascinating and unique performance grew quickly in Germany, which led Benedikt to perform in several festivals all over the country, walking on glass as well as eating and breathing fire.

In 1991, Benedikt joined a small German circus called “Circus Apollo”. It is with the members of the circus that he learned acrobatics and juggling as well as knife throwing. Benedikt toured with Circus Apollo for four years and later for three years with “Hallucination Company” which blended circus acts, theater and original music. Benedikt experimented increasingly in performance with conveying emotions without words, which began his fascination and work with mime. In 2002 he joined Cirque du Soleil’s “O”. He was then with the show for thirteen years, well over five thousand performances.

In recent years, Benedikt filmed with directors James Cameron and Andrew Adamson. In addition to his work in Cirque du Soleil, Benedikt also started the highly-acclaimed 1230 Clown Show (twelve thirty) a European-style, late-night clown show based in Las Vegas. The show’s roster boasts professional clowns from the Strip’s most renowned shows including Cirque du Soleil, Matsuri, Le Rêve and Jubilee. During each 70-minute show, audience members were treated to hilarious and virtuosic performances inspired by varying themes ranging from the topical to the absurd. It may be only a matter of time before that, too, is revived for the post pandemic era. We are thrilled to welcome him back to Seattle and to the 2022 Moisture Festival.