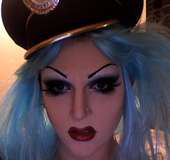 As a performer, emcee, party hostess, and event promoter Ben DeLaCreme
has appeared in theaters and nightclubs from coast to coast ever since
the fateful day in 2002 when s/he realized that normally unsavory
behavior could be dressed up in fancy clothes and called “Performance
Art.”

Formerly based in Chicago, but with lucite heels now planted firmly in
Seattle, DeLaCreme combines his/her background in the performing &
visual arts with a love of spectacle, glamour, and Saturday morning
cartoons to create a thick sludge of sparkly entertainment certain to
stick to your ribs!

When not at home looking for new things to glue rhinestones to,
DeLaCreme can be found Emceeing and Performing in venues throughout
Seattle, as well as teaching with the Academy of Burlesque.