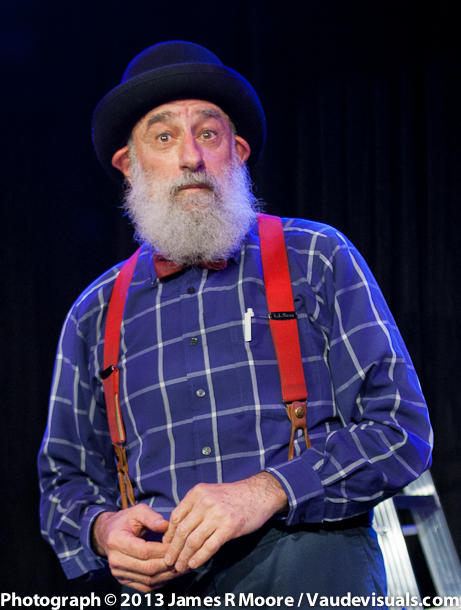 Avner Eisenberg was one of a handful of 1970s street performers who took their acts into theaters and, along with the Flying Karamazov Brothers and others, gave birth to the New Vaudeville movement. Even in those early days, this Georgia-born clown was recognized by other performers as wise beyond his years. He helped them to consider what it was they were doing onstage and how they went about doing it. After obtaining a BA degree in theater at the University of Washington in 1971 he took further training with Jacques Lecoq in Paris and then with Carlo Mazzone Clementi in California. Avner acknowledges a debt to these two masters who helped to give him direction: “Lecoq, taught me everything I know and Carlo taught me the rest” and he repaid that debt by doing the same for many of us for many years. Along with top theater credits (his one-man show was a hit of the 1984-85 Broadway season and was followed by rave reviews as he toured America and European theaters), the big screen (he co-starred with Michael Douglas, Kathleen Turner, and Danny Divito in the film Jewel of the Nile) and small screen (many TV shows worldwide) Avner is often a featured performer at comedy, magic and theatre festivals including The Edinburgh Festival, the Israel Festival, the Montreal International Comedy Festival, the London International Mime Festival, the Festival of American Mime, the New York Clown Theatre Festival, the Fool’s Festival, the New York Magic Symposium, the Hudson Clearwater Revival, and the International Movement Theatre Festival, The International Festival du Cirque in Monte Carlo, Arosa International Humor Festival, Barcelona International Clown Festival, Leipzig Lach Messe, St Gervais International Theater Festival, the Blackpool Magic Festival and, of course, the finest of these: Seattle’s Moisture Festival . Avner has been inducted into the International Clown Hall of Fame.