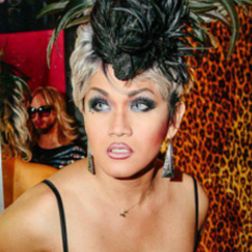 Drug counselor by day, drag diva by night. Aleksa Manila is a celebrated and respected drag personality. Originally from Manila, Philippines, she now calls Seattle, Washington home.
Aleksa is a favorite emcee/host, speaker/panelist, performer/model at many events in the region because of her smart and sassy presence onstage and her ease of engaging her audience. She’s a staple in Seattle’s landscape from ICON – a celebration of drag, art & life!, LEO Party, University of Washington’s Lavender Graduation, Seattle Pride Parade, Seattle Pridefest, Seattle Pridefest Capitol Hill,Lifelong’s Gay Bingo to Seattle Symphony’s Celebrate Asia among many. Plus you can see her as Helena Pen Poison on Wes Hurley’s Capitol Hill Web Series. Notably, she has performed with Pink Martini on various concerts including Zoo Tunes, Chateau Ste. Michelle, Crystal Ballroom, Microsoft, Washington Park and Kirkland Performance Center.
Over the years, she has been recognized for her community effort in advocacy and social justice. This year alone, Aleksa has been honored with Seattle Mayor Jenny Durkan’s Pride Award for Outstanding Leader, Seattle Women’s Pride for Community Champion, the Filipino American Student Association at the University of Washington 100th Year Anniversary Recognition as one of 100 Centennials in advancing Filipino Americans, and the GSBA (Greater Seattle Business Association)Humanitarian Honoree for Community Leadership. She was also honored with the prestigious Dr. Bob Wood Award for Excellence in HIV Prevention in 2013, and was Grand Marshal at the 40th Seattle Pride Parade in 2014 alongside her hero, Mr. George Takei.
In 2012, she founded Pride ASIA whose mission is to celebrate, empower and nurture the multi-cultural diversity of the Lesbian, Gay, Bisexual, Transgender and Queer communities through the Asian Pacific Islander lens.
In her professional career, Aleksa when “not-in-face” is the Program Coordinator of Project NEON and Program Supervisor of Addiction Services at Seattle Counseling Service.