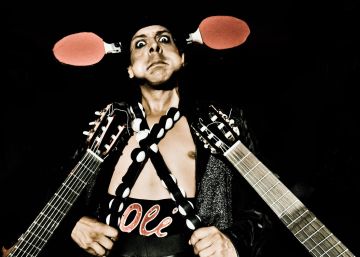 In 1984, Paul Morocco left his home in Virginia Beach, Virginia with nothing but a guitar, a bag of fruit, a pocket full of ping pong balls, and a personal mission to avoid cliches forever.

A former member of the International Jugglers Association, Paul learnt his craft of juggling, comedy, visual clowning and music on the streets of New Orleans, New York and London.

Paul has performed in comedy clubs, theatres, and on major TV shows in UK and Europe, including Johnathan Ross, Jools Holland, “The Happening”, and Save The Children Royal Charity Show.

A legend among Varieté worldwide, Moisture Festival finally has a chance to bring him to our festival in Seattle, you’re going to be so glad we did. Oh boy!