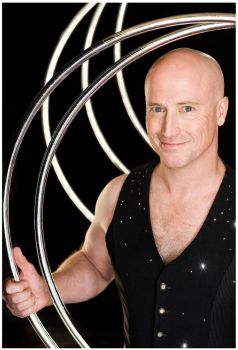 Mat won the US National Hula Hoop Championship at age 13 on the Dinah Shore daytime TV show, earned an undergraduate degree in theatre, and subsequently began a career appearing in circuses and variety shows around the globe.  He made his professional debut on The Tonight Show Starring Johnny Carson at age 24, followed by several more appearances on that show and others including Merv Griffin, The New Mickey Mouse Club, Donny and Marie, Comic Strip Live, For Our Children The Concert, The Dolly Parton Show, The Jerry Lewis MDA Telethon, and many others., plus 15 years touring as an NBA half-time attraction, opening act, numerous trade shows and corporate events.  Mat has appeared at Madison Square Garden, The Palais Garnier (Paris), and was featured in Franco Zefirelli’s production of Pagliacci for the Los Angeles Opera.

From 2002-2012 Mat was one of the stars of the long-running hit Teatro ZinZanni in Seattle and San Francisco. In 2012 he joined the cast of the Fabulous Palm Springs Follies, and in 2014 was one of the featured acts in Zircus! in Gold Coast, Australia.  Since May 2014 Mat has been one of the guest stars of “VEGAS! The Show” at Planet Hollywood in Las Vegas.

We’re so glad to finally be able to get Mat moist.