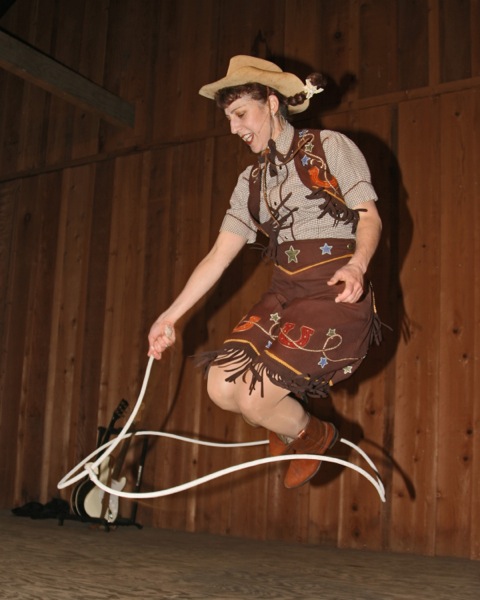 Ms. Quest is the recipient of many accolades from the Wild West Arts Club International Conventions, including the Comedy Award, Women’s Big Loop Winner and Most Unusual Rope Trick (with Fred Schneider), as well as several ping pong trophies, and many attendance awards from her younger days. This San Francisco-based performer entered a photo contest sponsored by the Pendleton Woolen Mills, and won with this image by photographer Ron Arcaroli, self-titled, “Flying Pigtails”.

A 13 year college plan, odd jobs too numerous to mention (well, if you insist: singing and dancing cookie for Van De Kamp’s, and Olive Oyl in a big rubber head for the Popeye Circus with the directors of the L.A. Circus), have made for an unpredictable and interesting, if peripatetic career. An alumna of the Pickle Family Circus, Make*A*Circus, Ringling Bros. and Barnum and Bailey Clown College and the Gong Show, Miss Quest is so much more than a cowgirl; she has created an array of original comedy characters and loves teaching circus, theater and western skills.

The Moisture Festival is thrilled to bring Cowgirl Tricks back to Seattle and KQ, as she is known to her good friends, is thrilled to be part of this masterfully orchestrated chaos. She dedicates all her shows to the heavenly quartet of her father Morrie, her mother Sadie, brother Richard and clown goddess Peggy Ford. All you really need to know is what the Curly Fries Lady at the Skamania County Fair said to her: “You’re one of the few acts that doesn’t get on my nerves.”